Is wild camping allowed in Spain?

Wild camping, also known as boondocking, dry camping, or dispersed camping, is tolerated in Spain depending on the region, but can result in penalties in some areas. We have put together a few tips for you that you need to consider.

You can find the perfect pitch to set up your camp with the Caravanya App:

Written by: Susana
Get to know the whole team
Last researched: Winter 2021/2022

In Spain, depending on the region, different authorities such as municipalities or the nature conservation authority are responsible for wild camping. For this reason, there are different guidelines and penalties which cannot be standardized. To restore your ability to drive, you are allowed to spend the night in the car, but you should not put camping chairs in front of the car, as this will turn a rest break into wild camping.

In principle, wild camping is tolerated in the following places and the topic is dealt with more loosely:

Wild camping is more strictly controlled in the following places:

In these areas, you may be subject to fines ranging from 30 € to 800 €. Especially coastal areas are strictly controlled, even if the beaches are not accessible and used by tourists. In these areas, authorities use helicopters to track down wild campers.

Tips and tricks for wild camping in Spain

Set up your tent on the beach of Gran Canaria, Tenerife or Fuerteventura, listen to the sound of the waves and enjoy the picturesque sunset. The next morning, enjoy the fresh sea breeze and coffee on the beach. This is the dream of many campers. Unfortunately, it is not allowed to camp on the beaches, but there are enough enchanting places in Spain that you can enjoy. We have put together a few tips to make your trip to Spain a little easier.

Wildlife
You should research the region in which you want to camp. In parts of Spain, there are poisonous animals like scorpions or various species of spiders and snakes. In the north of the country, there are also wolves and bears, although it is very unlikely that you will encounter them in the wild. So be careful where you set up camp.

The danger of forest fires
In Spain, very high temperatures and sometimes longer dry periods prevail, especially in summer, which results in an extremely high risk of forest fires. Only this summer there was a devastating forest fire in Catalonia, in which over 4,000 hectares of forest were burned. Avoid fires near forests and dry meadows.

Ramblas
Many beaches lead so-called Ramblas, which is often underestimated especially by tourists and campers. Ramblas are empty river beds that look like dirt roads at first sight. When it rains, they can fill up extremely quickly and develop into torrential currents. Also here you shouldn't settle overnight.

Hunting areas
Large areas of Spanish nature are hunting grounds. You can recognize them by black and white tin signs or signs with the inscription "Coto privado de Caza." These areas should be avoided as a matter of urgency, as hunters are already on their way early in the morning outside the breeding and setting season and shots echo through the air.

By the way: According to a study by the ADAC, Spain ranks sixth among the cheapest camping countries in Europe. Two adults with one child pay an average of 39.89 € for an overnight stay on a campsite, including parking space and ancillary costs.

That a siesta is held in Spain because it can get extremely hot around lunchtime is not news. Also that they live football knows the whole world. But did you know how fast the Spaniards speak or that this is the only desert in Europe? We have put together some interesting facts about Spain for you to get an idea of what to expect in Spain.

Fact #1 - Tomatina
Every year at the Tomatina Festival the inhabitants of Buñol throw themselves with overripe tomatoes. On average, about 160 tons of tomatoes fly through the air.

Fact #2 - Quick speaker
Spain is the fastest spoken language in the world in terms of syllables spoken per second. They create about eight syllables per second.

Fact #3 - Desert
Yes, there are deserts in Europe too. More precisely, there is exactly one desert in Europe, the desert of Tabernas. The 280 km² large desert lies in the south of Spain in Andalusia.

Fact #4 - Sand theft
At the Platja del Palma in Mallorca, more than 82 tons of sand are "stolen" every year. Tourists from all over the world unconsciously carry the sand home in their clothes and bags.

Fact #5 - Spanish punctuality
Spaniards have many qualities, but punctuality is not one of them. A delay of up to 30 minutes is not unusual and is not seen as rude.

Fact #6 - Density of pubs
You want to sit in a bar and drink a glass of wine or a cold beer? Spain has the highest density of pubs in Europe.

Fact #9 - Coffee
You want to have a cappuccino or latte macchiato? That could be difficult. Spaniards usually only drink their coffee black or with milk. But sugar is always part of it.

Fact #10 - The capital city
Madrid, the capital of Spain, is well known. But did you know that Madrid is the geographical center of Spain? The "Puerta del Sol" square is the exact center of the country. 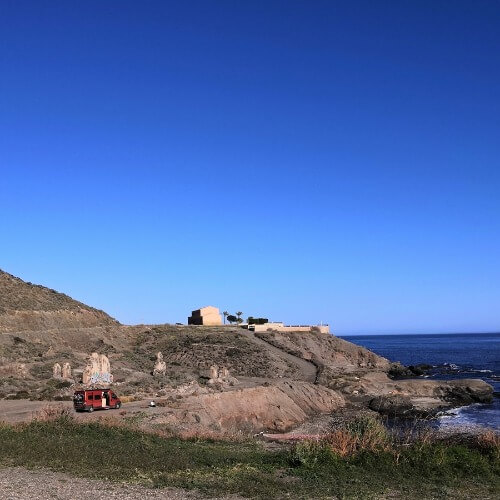 clever-on-tour.de report in their blog article about the trip on the Costa de Almería. An exciting travelogue full of rain, storm, and adventure. Here you can find the whole article.

You could find this interestig, too...

Partner and friends of Caravanya

You also want to become a partner of Caravanya?